In our next Issue, “Language & Music,” coming out December 26, we’re proud to feature an interview with award-winning Oklahoma author, Constance Squires, whose work has appeared in the Atlantic, Bayou, Eclectica, Identity Theory, New Delta Review, and many more. 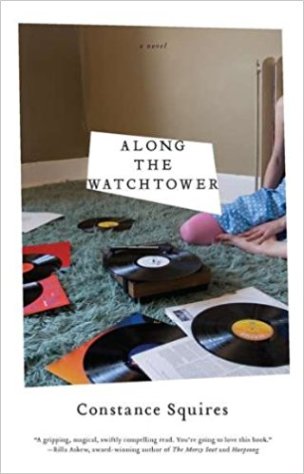 Along the WatchTower (2012) is Ms. Squires first novel. Set in the 1980s, on an American army base in Germany and then in an Oklahoma small town, the novel chronicles the growing up of young Lucinda Collins, following her from adolescence on into young adulthood. We get to experience the growth of this eager-to-please, yet strong-minded woman through the world of a military family — overseas and Stateside.

The setting is something we don’t really see in fiction, that of the military family. And it would take someone with Ms. Squires’ particular talent to truly color and people an environment that is often institutional and drab. But there is no doubt, this novel is vigorous and alive.

The book gives us a wishbone with young Lucinda at the vertex and her mom on one side of the V, her father on the other. What makes the story wonderful to read is the author’s ability to deftly and clearly portray the characters’ cosmic arcs, and from the start we sense the tension bending on the bone where we find young Lucinda.

Faye Collins, Lucinda’s mother, obviously has the artist’s soul, the Creative’s gravitas; her’s is a mighty intellect harnessed into the world of being an army wife. She is always the volcano under the bulk of crust…waiting for release. The manner in which she has arrived in this marriage, as illustrated by Ms. Squires, makes complete sense. The fact that she appears unfit for the life it provides is obvious, yet her world is bruised by the desperate and inescapable need for her husband and kids — by the things they can and can’t provide.

This wishbone creaks from the start. It is Lucinda, our young protagonist who has to figure things out inside this arrangement. To be in the military, to grow up in that kind of family inevitably means the lowering of expectations in our friends. It’s not that we need them less, or that they’re worse…we just have to replace them all the time. So, standards might be a bit more flexible.

Throw in Rock and Roll — Punk — booze — a touch of fascistic background radiation — devastating metaphors — and we have a wonderful, coming-of-age tale spread across the Atlantic, in a setting that is too little represented in literature.

We need this author, and we need her to tell us her stories. Regardless of topic, Ms. Squires has the gift for flesh and blood. It’s impossible to think of Along The WatchTower without the people in it coming alive. For instance, Jack Collins has one of the clearest voices I’ve ever read. His dialogue crackles in the head with the clarity of a Holden Caulfield. And Ms. Squires’ energies are not wasted there; the minor characters pop as much as any.

As part of the Almagre community, we encourage you to support creative thinking, Great Storytelling, and find your way to a copy of Along The WatchTower. It is a pleasure from start to finish.