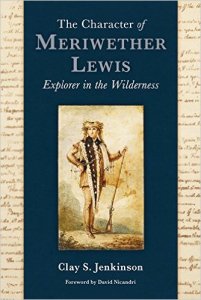 A wonderful book! Clay Jenkinson explores Meriwether’s character and leadership like a geologist in the field, not a benchtop analyst in the lab. This is an intimate journey; he does not simply put the specimen under a magnifying glass and jot down a detailed list. He picks the matter up, rotates it, puts it under various lights, illuminates the textures, and manages to pluck a real person out of the shady bin of historical mythology. Lewis becomes someone we start to know.

What works well in this narrative is the use of various angles to explain the subject. One encounters John Donne, Dickens, L. Ron Hubbard, Eric Sevareid, etc., as vehicles to clarify the complexities of Meriwether’s difficult, sometimes overwrought nature. Clay’s application of Donne’s poetic conceit, likening Lewis and Clark to a fusion core, is an example of successfully using this approach. The polarity of prose is also effective. One goes from literary metaphors, Jefferson’s “theater” of grief in Virginia after his wife dies, Lewis’s “attic” of isolation and anxiety as governor, to the vernacular of being, “shot in the ass.” Whether this works for all is difficult to say, but it contributed to the book’s wonderful readability. In a page, one might laugh out loud, then delight in the discovery of a new word (“hendiadys”), next to feeling sadness over the tragic and rapid decline of Lewis.

One also appreciates Clay’s integrity to truth. It’s quite a feat, to bring to life and humanize someone as mythologized as his subject, yet maintain a constant fidelity to fact. The narrative never veers off into wild speculation, nor does it favor sensationalist assertions over strongly argued conclusions. The reader is led down a rational, sober, extremely interesting path, and Clay offers compelling insight as to how events affected Lewis and helped to lead him to his end.

A supremely interesting narrative about the complex character of one of America’s greatest leaders.